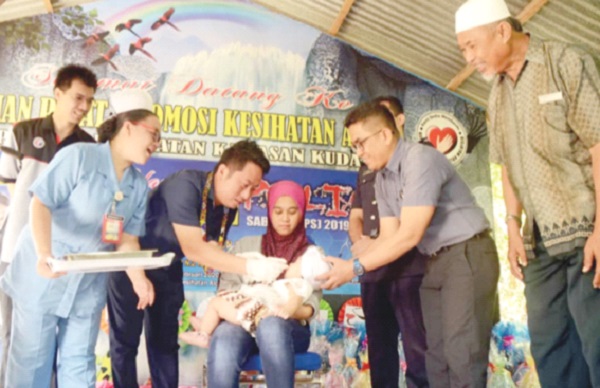 KUDAT: State Assistant Minister of Trade and Industry, Ben Chong, said it is important that parents here take the opportunity to provide polio immunisation to children to prevent them being infected by the disease.

He said the participation of parents and local community in the massive polio immunisation campaign organised by Kudat Area Health Office is necessary as a precautionary measure to prevent the disease.

“The free polio immunisation campaign targets all children aged 12 and below regardless of their nationality,” he said when opening the district-level Sabah Polio Immunisation Campaign.

In addition, he said the people here are reminded to practice good hygiene such as washing their hands with soap and clean water after using the toilet and changing children’s diapers.

He said this is because polio can be spread via hand contaminated by faeces containing polio germs.

“We also need to maintain the cleanliness of the surrounding area with proper waste disposal practices.

“Improper disposal of waste can cause our environment to become polluted and can cause various disease outbreaks in our area,” he said.

While congratulating the Health Office, Ben, who is also Tanjung Kapor Assemblyman, said the campaign was a continuation of the State-level Polio Immunisation Campaign that had been previously launched.

He said this reflected the concern of the Ministry of Health, through the State Health Department to deal with the disease in the State.