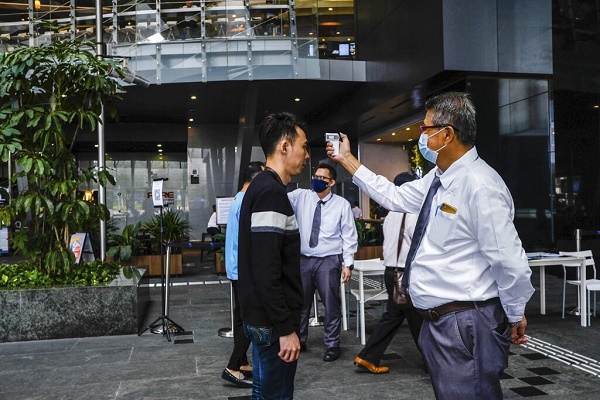 A man scans a visitor’s forehead to check his temperature before entering the Asia Square Tower in Singapore. (Photo: AP)

SINGAPORE: Singapore has reported a daily record of 942 infections that saw its total surge to 5,992.

The sharp one-day spike in the tiny city-state of nearly six million people is the highest seen in Southeast Asia.

The number of cases more than doubled this week amid an upsurge among foreign workers staying in crowded dormitories, who constitute 60 percent of Singapore’s COVID-19 infections.

Prime Minister Lee Hsien Loong wrote on Facebook that the vast majority of cases among migrant workers were mild as the workers are young.

Although cases in the dorms are expected to continue to rise, Lee said the government is increasing healthcare and isolation facilities to handle the load. More than 200,000 migrant workers from Bangladesh, India and other Asian countries live in dormitories housing up to 20 people a room with shared facilities.