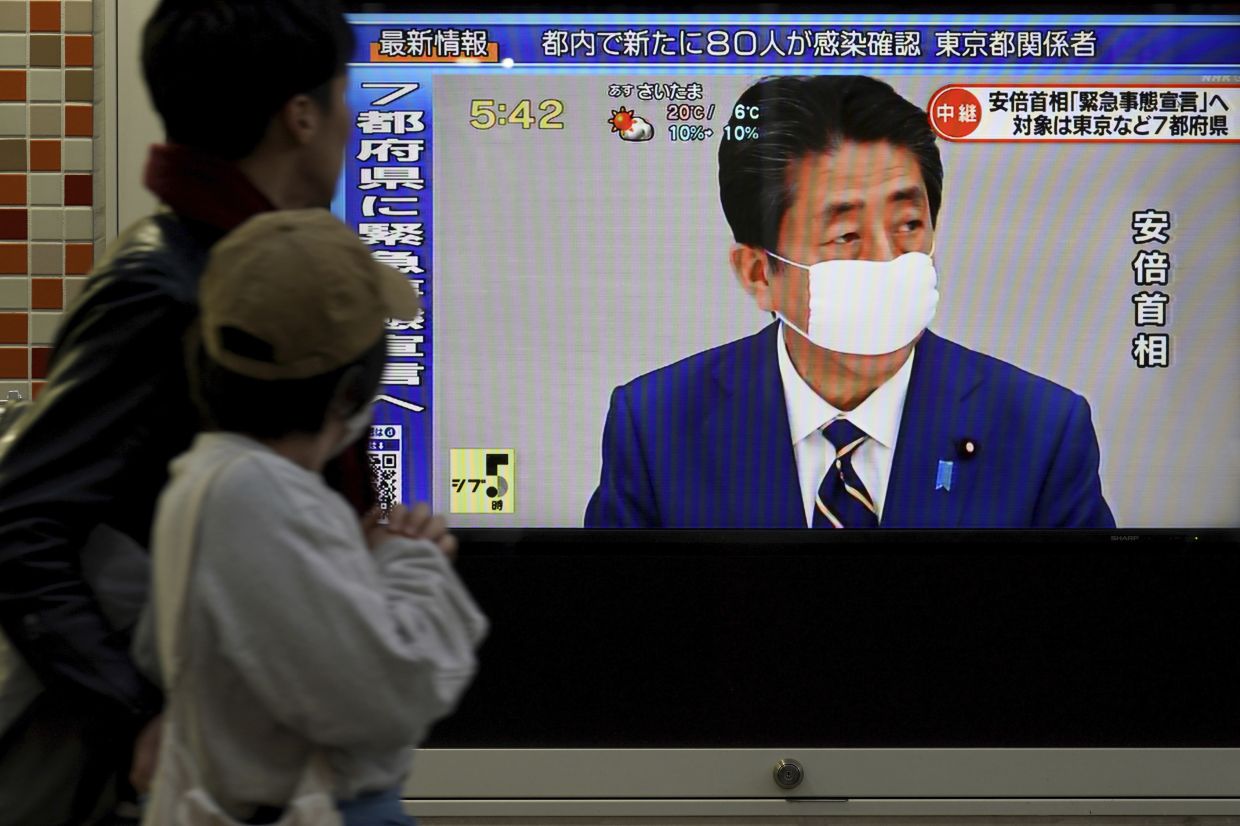 TOKYO (AFP): Japan, on Tuesday (April 7), declared a state of emergency over a spike in coronavirus cases, ramping up efforts to contain infections but stopping short of the strict lockdowns seen in other parts of the world.

The government has come under mounting pressure to tackle an outbreak that remains small by global standards but has raised concerns among Japanese medical experts, with warnings that local healthcare systems are already overstretched.

"As I decided that a situation feared to gravely affect people's lives and the economy has occurred... I am declaring a state of emergency," Abe said.

The move allows governors in seven affected regions, including Tokyo, to ask people to stay indoors and businesses to close.

But many supermarkets and other shops will stay open, transport will continue to run and there are neither enforcement mechanisms nor penalties laid out for those who fail to comply with government requests.

"Although a state of emergency is declared, it won't mean a city lockdown as seen overseas," Abe said.

"We will prevent the spread of infection while maintaining economic and social services such as public transport as much as possible."

Pressure to declare an emergency had increased after Tokyo reported several days of record infections, with 143 new cases logged on Sunday (April 5).

Tokyo Governor Yuriko Koike has already asked residents of the capital to avoid unnecessary outings and work from home, but had pushed for an emergency declaration to give her requests legal strength.

Seven regions are covered by the month-long declaration - Tokyo, neighbouring Chiba, Kanagawa and Saitama, the western hub of Osaka and neighbouring Hyogo, and the southwestern region of Fukuoka.

The measure will last through to the end of the Golden Week holiday period, when much of the country travels in a rare break.

"It may cause inconvenience in daily life, but I call for everyone's cooperation because lives are at stake," Koike told reporters earlier.

The measure also allows governors to commandeer property for medical purposes and close public facilities such as schools, many of which have already shut down.

The economic impacts of the measure and the broader global pandemic have raised concern of a recession in Japan, and Abe on Monday unveiled plans for a stimulus package worth around US$1 trillion (RM4.34 trillion), or 20% of gross domestic product.

Japan has so far been spared the sort of virus outbreak seen in parts of Europe and the United States, with close to 4,000 confirmed infections and 80 deaths.

But medical experts have repeatedly sounded the alarm in recent weeks, citing the rapid increase of infections in parts of the country.

And on Monday, doctors in Tokyo said the situation in the capital was already in "critical condition".

In a bid to ease the pressure, rules requiring people infected with the virus to stay in hospital even if their symptoms are mild have been relaxed, with Koike saying hotels would be designated as quarantine facilities for those in non-serious condition.

The government has also pledged to step up testing capacity and the number of beds and ventilators available to treat those in serious condition.

The state of emergency is a relatively relaxed approach to lockdown compared to other parts of the world, a function of Japan's legal system, which restricts the government's ability to limit the movement of citizens.

"Japan is still haunted by the negative legacy of the war and the oppression of its citizens," said Yoshinobu Yamamoto, an emeritus professor of international politics at the University of Tokyo.

But he warned that there could be calls for stronger measures if the outbreak continues to spread.

Japan saw its first case of the virus in mid-January, and came under heavy criticism for its handling of the coronavirus-wracked Diamond Princess, where an on-board quarantine ended with over 700 people contracting the virus and 11 deaths.

In the capital, people expressed support for the state of emergency, with some saying they felt it should have been declared sooner.

"When you see on TV what's going on in New York with the cases doubling within three, four days, it really sends chills down my spine," 76-year-old Mitsuo Oshiyama told AFP.

"I don't understand why the government waited so long." - AFP