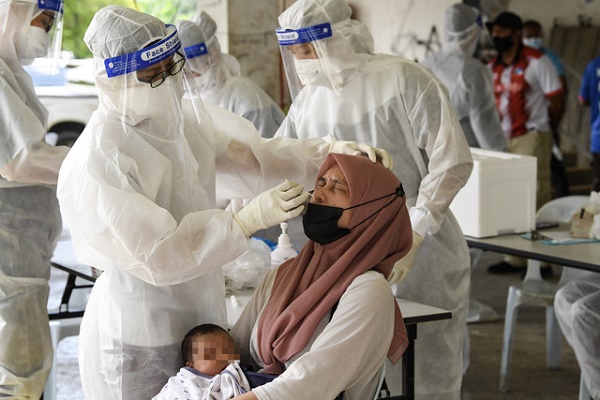 GEORGE TOWN: A virologist has warned that the daily Covid-19 infections could double up to nearly 20,000 a day within the next two weeks, given the rising number of cases caused by the more infectious Delta variant.

Kumitaa said the number of deaths was also likely to hit 200 a day, as the health system was pushed to its brink.

However, she said the new variant was not more dangerous compared to the others, but more deaths would occur when the healthcare system was under pressure.

“New variants rarely become more dangerous because they rely on humans to live,” she told FMT.

“But they do evolve to transmit faster, which is what we are seeing now. We will see a higher number of deaths when the healthcare system is unable to cope,” she said.

Kumitaa said, for example, while the Beta numbers were higher now, Delta spreads at a more rapid rate. She said a Beta-variant virus would be able to replicate five cases in four days, but the Delta variant would take just one day to create five new cases.

She said that based on the infectivity rate of 1.14 as of yesterday, the virus was spreading at an exponential rate, and the number would go up with more positive cases detected.

Based on yesterday’s 11,000-odd positive cases, she said, new infections could see that number multiplied by 1.14 daily.

Kumitaa said the R0 numbers change with place and time and are used to predict whether a particular disease is spreading, levelling or diminishing. Numbers below 1 would put the virus in decline until it dies out.

She said the prevalent Delta strain was highly infectious, as data from 64 countries showed that a person with that strain had a 97% chance of infecting others in comparison to the older strains. If the previous virus was transmitting from one person to two, the Delta variant would transmit to four people.

In view of the rise in cases, she said, they could use saliva self-testing kits, which were easy to use at home, in hotspots and vaccinations need to be ramped up.

She also called for quicker isolation of those testing positive. “If there are no proper areas for Covid positive people to be isolated, then that defeats the purpose of mass testing.”

She also said wastewater testing could be carried out in low prevalence areas, which enables the early detection of Covid-19 cases within a community.

The US Centers for Disease Control and Prevention (CDC) has introduced an in-depth guide on how to utilise the sewer samples as an indication of Covid-19 case growth.