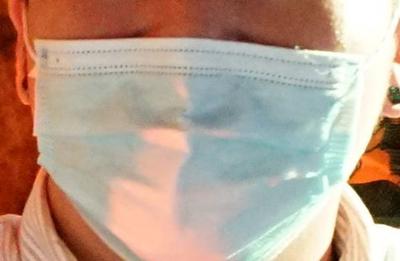 JOHOR BARU: A couple is crying foul over two compounds issued by the Domestic Trade and Consumer Affairs Ministry to them for not wearing face masks even though there were no customers in the premises at the time.

Hong Chee Sheng, 52, who owns a school uniform shop in Taman Johor Jaya here, said he had pulled down his face mask to his chin while standing at the front counter at around 3pm on March 7 since there were no customers.

“I noticed a man outside my shop so I quickly put on my face mask properly before walking out, thinking that he was a customer.

“The man then introduced himself as a ministry enforcement personnel and rudely told me that I had violated the law by not wearing a face mask.

“I explained to him that there was no customer inside my shop so I pulled down my face mask for a breather but he insisted that I was in the wrong, ” he said at a press conference organised by Pasir Gudang MCA division chief Tan Tuan Peng on Friday (March 12).

He said the enforcement personnel showed him a video recording on his smartphone before Hong realised that the man had been secretly filming the shop.

Hong added that he was puzzled that his 48-year-old wife Yong Chan Chin, who was having tea in the shop’s back room, was also compounded for not wearing a face mask.

A RM1,000 compound was issued to each of them under Section 15 of the Prevention and Control of Infectious Diseases Act 1988.

Tan said the ministry officer should have advised them before slapping the couple with a compound because there were no customers present at the time.

“The Act does not say that a person has to wear face masks for 24 hours while inside the premises.

“It depends on the situation. It is an offence when they do not wear a face mask if there are customers around, ” he said.