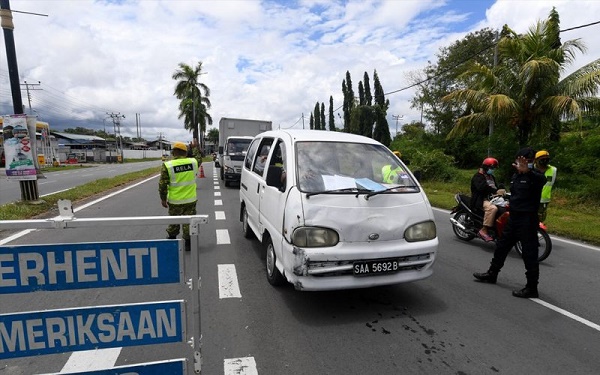 State police chief says they want to be ready ‘for any eventuality or situation’. (Bernama pic)

KOTA KINABALU: Sabah police are preparing for the possibility of an inter-district travel ban after the state recorded a surge in Covid-19 infections after the new year.

A letter notifying all district police chiefs to be ready for such a probability has been making the rounds on social media since yesterday.

State police chief Hazani Ghazali confirmed that the memo was issued to the respective districts two days ago.

He said while the actual order for a travel ban would have to come from the government. Nonetheless, the police will need to act quickly when it does.

“We have to be ready for any eventuality or situation,” he said.

Police in the respective districts have been told to brace themselves to mount roadblocks and prepare travel permits, among others.

An inter-district travel ban was imposed in the state for two months from October last year.

Yesterday, Local Government and Housing Minister Masidi Manjun said Sabah could go into a full-scale movement control order (MCO) or lockdown after a spike in Covid-19 cases since the beginning of the new year.

Masidi said the authorities may have no choice if the numbers continue to rise in the state.

He added that Sabah may even have to ban interstate travel, including flights in and out of the state, if the situation escalated.

The trend in the last seven days before the new year saw some reduction in cases, with 157 cases the lowest and 299 being the highest, with an average of 232 cases a day.

However, since the new year, the numbers have steadily climbed from 254 cases on Jan 1 to 405 cases yesterday.