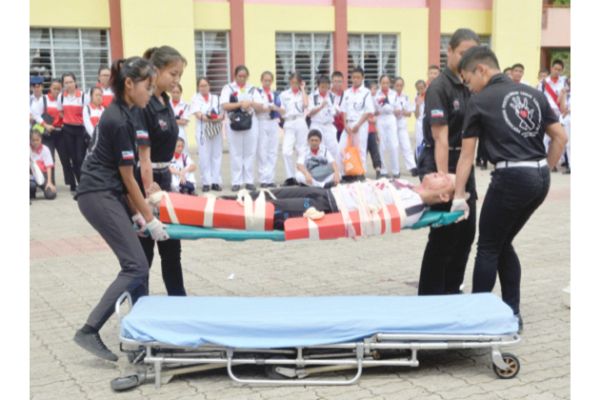 PENAMPANG: Deputy Permanent Secretary to the Ministry of Education and Innovation, Sebastian Ingkim is urging all NGOs including Malaysian Red Crescent Society (MRCS) to work together with National Association Prevention of Drug Abuse or Pemadam to eradicate the drug menace especially syabu which is now at a “worrying” level among youths.

He said this when presenting appointment certificates to 36 school teachers who are MRCS officers training their student members.

Ingkim said the problem may not be serious in Penampang but at state level, students and school leavers have been brought before magistrates due to syabu abuse.

Earlier, he expressed pride with the achievement of Penampang District MRCS where he was welcomed by a parade of the district uniformed unit. SMK Limbanak, the host of the event has ample grounds for parade practice, which is also the leading school for Police Cadets and Mini United Nations for students.

A demonstration of MRCS ambulance unit was performed later. Senior MRCS officers said they are still waiting for WHO guidelines on first aid in view of the current Covid-19 worldwide outbreak. – Oswald Supi