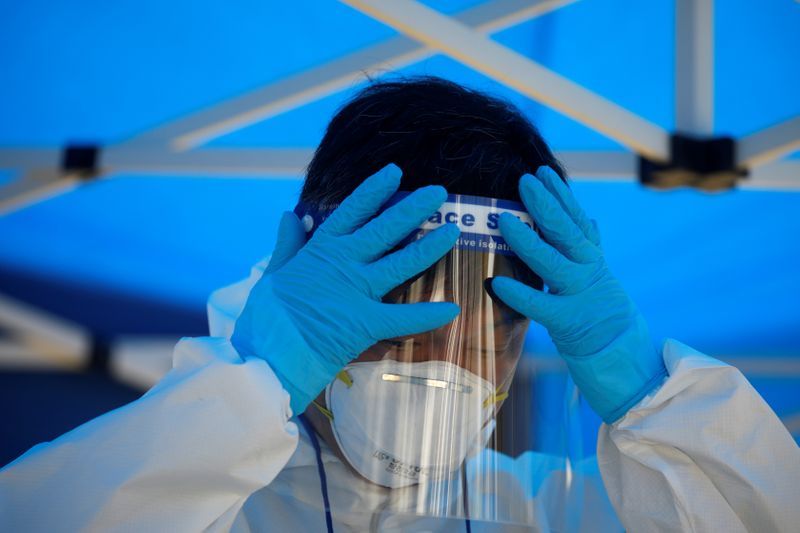 FILE PHOTO: An election officer puts on a protective face mask protective before South Korean patients affected with the coronavirus disease (COVID-19) arrive to cast their ballots for the parliamentary election at a polling station set up at a quarantine center in Yongin, South Korea, April 11, 2020. REUTERS/Kim Hong-Ji

SEOUL (Reuters) - Patients who tested positive for novel coronavirus after recovering from their first bout of the illness appeared to be far less infectious the second time round, South Korea's health authorities said on Wednesday.

While the trend in new cases in the country remained downward, the Korea Centers for Disease Control and Prevention (KCDC) has begun investigating a growing number of people testing positive after recovering.

More than 180 such cases have been reported so far in South Korea but none were found to have infected anyone else.

But investigating people who appear to suffer a relapse after recovering from COVID-19, the KCDC takes cultures of the virus, a process that takes more than two weeks before reliable results become evident.

So far, culture tests are underway for 39 cases, but all six completed so far have been negative.

"That means the virus in the relapse cases have little to no infectiousness," KCDC director Jeong Eun-kyeong told a briefing.

Jeong dismissed the idea of replacing PCR tests with culture tests to determine whether a patient has fully recovered, due to the amount of time and resources that they require.

The KCDC said it is still examining why some patients test positive again after recovering.

Among the main possibilities are re-infection, a relapse, or inconsistent tests, experts say, and Jeong has said the virus may have been "reactivated" rather than the patients being re-infected.

The KCDC reported on Wednesday 11 new coronavirus cases, taking the total infections to 10,694. The daily tally of new cases has been hovering around 10 for the past five days.

After grappling with the first major outbreak outside China, South Korea has largely managed to bring the outbreak under control without major disruptions thanks to a massive testing campaign and intensive contact tracing.